On 12 December 2017, two years to the day from the adoption of the Paris Agreement at COP21, President Emmanuel Macron of France co-convened the One Planet Summit, in partnership with the World Bank Group and the UN Secretary-General. The Summit opened a new process of global knowledge-sharing, finance re-commitment, and climate-smart innovation, to speed the implementation of the Paris Agreement. 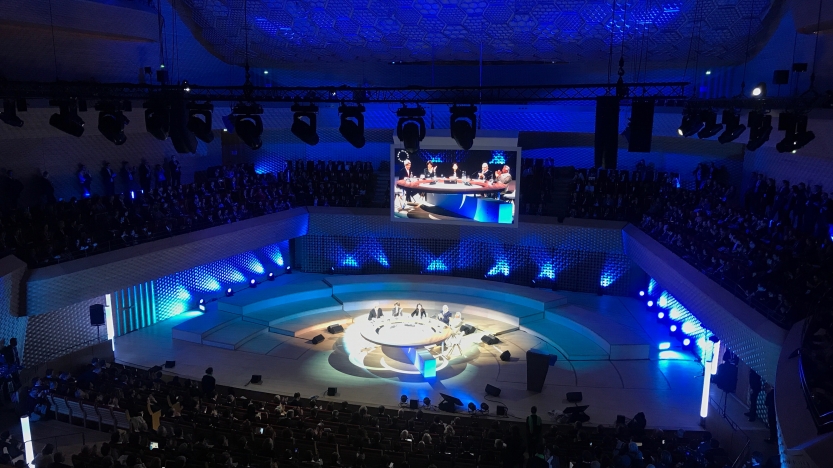 The Summit was attended by thousands of non-Party stakeholders and more than 50 heads of state and senior government ministers. The work product of the Summit was:

Citizens’ Climate Education, the Geoversiv Foundation, and the International Centre for Dialogue and Peacebuilding, in collaboration with the Norwegian Nobel Institute and the Kingdom of Morocco, convened a Working Dialogue on Resilience Intel at the Embassy of Morocco in Paris, the day after the One Planet Summit.

Here, we outline in brief 12 transformational commitments announced at the Summit…

Rebuilding the Caribbean — Mobilisation of USD 3 billion in a public-private partnership within an 8 billion investment plan to make the Caribbean the first Climate Smart Zone.

Commitment 3: Mobilizing Researchers & Young People to Work for the Climate

The Gates Foundation and the BNP Paribas Foundation are joining forces for $15 million over five years to enable young researchers from Africa and Europe to be hosted in international laboratories.

Launch of the “European Solidarity Corps” for the climate, with €40 million

The European Commission will fund a programme to encourage young European volunteers to participate in climate-related projects in Europe and around the world.

Under the initiative of the European Bank for Reconstruction and Development (EBRD), the Global Covenant of Mayors, the European Commission and the European Investment Bank, the “Global Urbis” programme will provide easier access for cities and regions in Europe and the Mediterranean Basin to public and private funds to implement their climate plan and thus speed up their transformation to sustainable cities.

Alliance of cities and regions for low-carbon public procurement

Towards Carbon Neutrality coalition
16 countries and 32 cities commit to reach carbon neutrality by 2050, initiated by Marshall Islands and New Zealand

Launch of the Paris Collaborative on Green Budgeting
OECD and a group of countries including France, Sweden, Mexico and Canada will pilot a new framework for presenting budgets that indicate the ecology and climate aspects in all their forms — public expenditure for the ecological transition, clean taxes, green bonds etc.

Creation of a Climate Observatory in Space
To provide States and the scientific community with all the space data necessary for monitoring the health of our planet, providing access to interoperable space-based earth observation data will be a significant step forward in the earth monitoring system.

Eight countries including Portugal, the Netherlands, Costa Rica and France, supported by the stakeholders of the Paris Process on Mobility and Climate (PPMC) platform, are creating an alliance to work together on roadmaps towards decarbonizing transport and increasing investment in clean transport.

Partnership of eight western US states for electric vehicles

Commitments by several countries to a more significant carbon price

The Environment and Climate Ministers of France, Germany, the Netherlands, Sweden and the United Kingdom welcome recent European Council agreements on reform of the European Union Emissions Trading Scheme. They also commit to examining, or even implementing in some cases, a significant carbon price in relevant sectors.

Launch of Carbon pricing for the Americas

Announcement by China of the unification of its carbon market

Today, China launched its national cap and trade carbon market which stands as a major progress for carbon pricing worldwide.

Call by businesses for carbon pricing

A coalition of more than 40 companies led by the Carbon Pricing Leadership Coalition (CPLC) is calling for a carbon price in line with the objectives of the Paris Agreement, in accordance with the recommendations of the Stern-Stiglitz High-Level Commission on Carbon Prices.

A Joint IDFC-MDB Declaration was adopted during the One Planet Summit between the 23 national and regional development banks from the International Development Finance Club (IDFC) (such as Brazil, China, France, Germany etc.) and multilateral development banks to increase funding dedicated to the implementation of the Paris Agreement.

These banks commit specifically to:

Creation of the working group One Planet Sovereign Wealth Funds: 6 of the largest sovereign wealth funds create an ESG framework (environmental, social and governance) to guide their investment decision

Sovereign funds hold assets which could reach over $15 trillion by 2020. At the initiative of the President of the French Republic, Kuwait, Norway, Qatar, New Zealand, Saudi Arabia and the United Arab Emirates are launching an unprecedented coalition of large sovereign funds in support of climate action. The initiative will be coordinated by France.

The “Climate Action 100+” coalition was launched during the One Planet Summit. It brings together 225 major institutional investors representing more than $26 trillion in managed assets to coordinate their actions as regards the 100 highest-emitting public companies.

During the One Planet Summit, some 15 philanthropists launched a task force to mobilize philanthropy to contribute to the implementation of the Paris Agreement.